​     An email from Candee Harris popped onto my screen. There it was—a handwritten letter from our then 4th-grade daughter to Bill Durrett, the executive director of the Wayne County Industrial Authority. Unless you were here in the 1980s, you might assume Coastal Pines Technical College has always been a landmark on U.S. 341 west.

​     Bill was new in Jesup. He arrived about the same time David Larson won a swimming gold medal in the 1984 Olympics. Wayne County was starving for an economic spurt. The possibility of a new vocational-technical school ignited community spirit hotter than an Olympic torch.

​     I remember an outspoken member of the county commission warning me, with a condescending sneer, “We are wasting our time. Sen. Joe Kennedy has promised that school to Glennville.” With a smile, I countered, “Commissioner, have they broken ground yet?” He said, “No.” And I said, “Well, then, we still have a chance.”

​     Bill Durrett was the hired gun who quarterbacked the effort, but dozens of Wayne Countians joined the quest to secure the school. I could call roll, but I dare not leave out one name. Teamwork worked. The campaign’s motto was, “There’s no limit to what can be accomplished when it doesn’t matter who gets the credit.”

​     I’m skipping a slew of the details, but Wayne County won out over a half-dozen other communities that wanted the vo-tech school, too. And you might imagine who was on the front row when picture-taking time rolled around. Yes, he was. Didn’t matter. Wayne County was victorious. I’ve never been prouder of our hometown.

In 2022, can you imagine Wayne County without the grown-up version of the vo-tech school—Coastal Pines Technical College? Whether I am walking into the campus or driving by, I smile, just knowing the backstory. 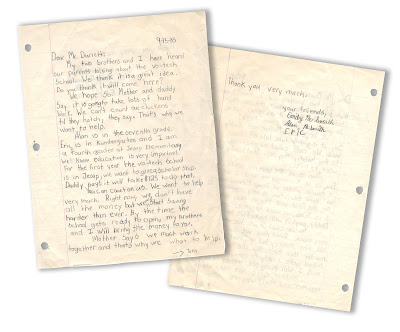 ​     And then comes Candee’s email. The economic development coordinator had been digging through old files and unearthed a 1985 letter from our daughter, who was a student at Larry Cooper’s Jesup Elementary. Candee thought I might like to have it. Indeed, I did.

And I thought you might like to read the letter—from 37 years ago—supporting the effort to secure the school. Today, Emily, 46, and Tom have four sons. Alan, 49, and Heather have two sons. Eric, the kindergartner, is now 43. He and Connell have a son and daughter.

While one person thought Wayne County was wasting its time, hundreds of others—of all ages—were busy making sure that the school would be built here.

Knowing the history behind the college is a reminder of what our community can do when the spirit and support are Olympic-flame hot. ​

Especially when it doesn’t matter who gets the credit. 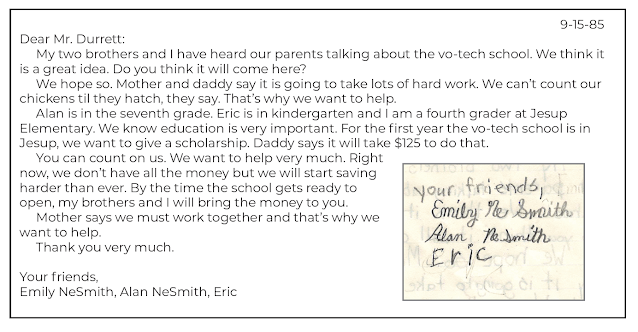