Wayne Ates was the ‘Minister of Mirth’

The helpers were usually high school seniors, so they didn’t work long at NeSmith Funeral Home.  But they were around long enough to make an impression on the owner’s kid.

The most famous was All-American fullback and linebacker Len Hauss, who switched to center as a Georgia Bulldog.  That change launched a 14-year NFL career with Len retiring as an All-Pro center and captain of the Washington Redskins.  I still have a boyhood vision of him running across the lawn to jump into a 1958 blue-and-white Ford ambulance.

The tallest man to ever help Big Dink was Harold Simmons.  How tall was he?  I guess 6-6, 6-7 or 6-8. I need to ask his sister, Lanette, about the former Jesup Yellow Jacket basketball star.  Harold, by far, had the longest arms, too.  That meant—on the flower detail—he could tote more potted plants than anyone.

Perhaps the most colorful character of all those who worked at 111 W. Orange St. was Wayne Ates.  I didn’t know what a raconteur was back then, but Wayne—with his rich baritone voice—became one and more.

Wayne Ates was gifted, as an ordained Baptist minister, a schoolteacher and a public speaker.  Drew Davis, our newspaper’s news editor for eons, told me that Wayne was one of his ninth-grade teachers.  I imagine many of our readers could say the same.

Back in the funeral-home days, I loved helping Wayne wash the hearse and ambulances.  He made work fun, telling stories.  He reminded me of comedian Brother Dave Gardner. What made Wayne so humorous was that he could shift voice dialects from one story to the next.

At one moment, he’d be a country bumpkin.  And then, Wayne would spin a Cajun yarn.  He’d tell about a Cajun who had struck oil.  With his newfound wealth, the Cajun wanted a “hallo, dat you.”  It wasn’t a haloed statue of Jesus.  It was a telephone, so he could say, “Hallo, dat you?” Listening to Wayne, you would declare that he was raised on catfish or gator-tail gumbo down in the bayou.

Instead, he was reared in Wayne County.  I remember what Nanelle Bacon said about Wayne’s daddy, the Rev. Barnette Ates.  She said, “Preacher Ates was the kind of fellow who would give you the last turnip in his garden.”  Wayne came from good stock.

His sisters Rita Ates Keith and Gloria Ates Strickland are fine women, too. I marveled at Gloria, as a bank teller. If there had been competition for speed on an adding machine, she’d have won a gold medal.  Gloria’s fingers were a blur.

But it was their brother whom I got to know best.  When I needed a public speaker for corporate or civic events, I had Wayne’s number on speed dial.  The Minister of Mirth never turned me down or disappointed the audience. 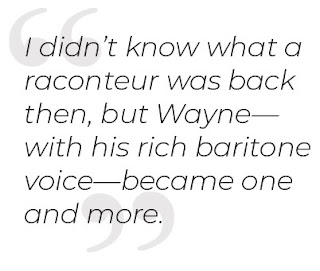 I’ll never forget the night he had Adel’s schoolhouse cafeteria howling. One of our newspapers was The Adel News-Tribune.  When I asked Wayne to speak at the annual chamber banquet, he jumped at the chance.  But with one stipulation (besides the honorarium): I had to introduce him.  I enjoyed listening to the crowd’s laughing as much as I did listening to Wayne.


Wayne’s repertoire was stacked with crowd-pleasers.  This is one of my favorites.  Clearing his throat, I can hear Wayne saying, “About those split-tail hospital gowns, they bring a new meaning to the medical term—ICU.”

And then he’d add, “And the last time I wore one of those gowns, it reminded me of my health insurance.  I wasn’t covered nearly as good as I thought I was.”

Wayne Ates, the Minister of Mirth, left us laughing.