Buc-ee’s had to be born in Texas

The ultimate Texas insult is “All hat and no cattle.” I am not sure how many cattle Arch Alpin III and Don Waskey owned—if any—in 1982. But I can tell you the Texans had a humongous herd of guts and vision when they founded Buc-ee’s.

Have you visited one of their Texas-sized gas stations with as many as 116 pumps and a convenience store bigger than you’ve ever seen? Curiosity caused me to exit I-75 near Warner Robins. I wanted to experience Georgia’s first Buc-ee’s. Now there’s another one on the other side of Atlanta in Calhoun. Remember when Stuckey’s pulled folks off the highway to get a free pecan log roll with a fill-up? Stephanie Stuckey is breathing life back into her grandfather’s dream. I am cheering for her.

William S. Stuckey Sr. was an innovator and a risk-taker, but he wouldn’t believe the roadside phenomenon that the pair of Texans have launched, soon to located be in 12 states. Like Legos, you could snap together about 15 original Stuckey’s under the Buc-ee’s roof in Warner Robins. Just short of 60,000 square feet, the Buc-ee’s is more than a gas station. It’s a tourist destination and shopping extravaganza.

Saturday, I didn’t need a fill-up.

I just wanted to see it for myself. The line of cars trying to get into the Buc-ee’s parking lot stretched on and on. I’m talking Georgia-football-game traffic. And that was just a preview of what was next. Inside, people were elbow-to-elbow with a Black Friday sales frenzy, pulling items from the shelves and filling baskets.

If you’ve been to a Georgia-Florida game in Jacksonville, you know what I’m talking about. There’s a mass of humanity trying to get to the front of the concessions line or into a restroom. That was the scene in Buc-ee’s. The lines at the cashier stations were long, too.

But make no mistake.

There’s something starkly different about Buc-ee’s. The restrooms are not your football-stadium variety. The gigantic facilities would make your mama proud. In a word, sparkling. If you don’t spend a dime, you won’t find a more sanitized pit stop on the road. 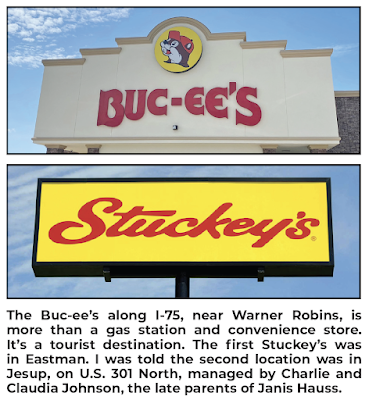 In fact, I didn’t spend a dime.

The aroma was tantalizing, but I resisted the temptation. The road was calling. I wanted to be in Perry before noon.

Back on I-75 South, I couldn’t ignore the next temptation. At the U.S. 341 exit, there was a yellow and red sign. Nostalgia tugged me off the interstate. Yep, there it was—a small Stuckey’s.

I didn’t need a thing. But for old times’ sake, I had to buy a Stuckey’s pecan log roll.

Arch Alpin III and Don Wasek can wear their 10-gallon hats with pride. Thanks to the genius of Buc-ee’s, they can buy all the cattle they want. For sure, I’ll stop in from time to time. The Texas-born phenomenon is worth watching.

However, my eyes are on what Stephanie Stuckey is striving to accomplish. I don’t think she covets a big hat or any cattle. But she wants to see her late grandfather’s dream come true, again. And as she succeeds, I don’t think Buc-ee’s will miss a dime.