I love the playful mischief of a harmless practical joke.

And last week, I got pranked pretty well.

Summertime is bounty-from-the-garden time. When I stopped by my friend’s office, Adam asked, “Would you like one of our cantaloupes?”

Adam pointed to the Styrofoam cooler.

When I lifted the lid, a rubber snake—looked like a cobra—greeted me.

Earlier, he had pulled the prank on another friend.

“Well, how about a small watermelon?”

“Well, help yourself,” Adam said, pointing to the cooler.

Out popped the fake snake.

The fellow almost ripped the hinges off the door exiting.

Guess he lost his appetite for small watermelons, too.

But I bet that he eventually laughed, telling the story to his friends.

My buddy Larry told me about his friend’s prank during the horror movie. Seems Tom’s girlfriend dumped him because he smelled too much like the chickens on his family’s farm. To make matters worse, she quickly traded Tom for a city fella. 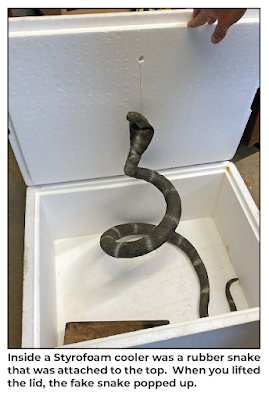 When The Birds came to town, Tom planned a prank.

He had heard that his ex and her new beau had a movie date. Tom decided he’d go, too, and sit in the balcony. Before he left the farm, Tom stuffed several chickens into a gunny sack.

When Hitchcock flooded the Hollywood screen with what looked like a million birds, Tom emptied his squawking and flapping “birds” over the balcony railing.

Tom, I don’t believe I’d have done that.

When Harry Tyre was running his Cherry Street gas station, I-95 was still on the drawing boards.  Tourists streamed up and down U.S. 301.  Harry had a classic prank for his out-of-town customers.

Sitting at the corner of the building was a 55-gallon drum with a wire top.  On the side of the barrel, Harry painted: “Warning! Dangerous Red Argentine Bats.”

When I was a boy, it was cheap entertainment to ride my bike to Harry’s and watch the tourists.  We called them “Yankees,” bless their hearts, the men in Bermuda shorts, up-to-the-knees black socks and sandals.

Men, women and children could not resist creeping up and peeking inside the cage.  Laughter heavily outweighed the cussing when they realized the “dangerous bats” were two red baseball bats.  Harry was full of harmless mischief.

One of my all-time favorite pranks was pulled on E.T. Youngblood, Jesup’s prominent wholesale grocer.  Forty years ago, James Harper told me about the infamous hijinks. I can still hear James laughing.

E.T. loved quail hunting.  He wanted a best-of-the-best bird dog.  Somewhere up the country, he found such a dog and wired big money.  When Cracker Williams and other cronies of E.T. found out, they engineered a prank.

The blue-chip pointer was to arrive by train.  Working with the depot freight manager, E.T.’s friends schemed a switcheroo—a dog-pound mutt for the field-trial champion.

The pranksters were hiding and watching when E.T. pulled up to the station to retrieve the bird dog of his dreams. But rather than the pricey pointer, he found a pitiful-looking, flea-bitten hound.

Cracker & Company let E.T. stew for a few days, and then they pulled another switcheroo.

My guess is that they are all in Heaven, still laughing.