Viewers saw it on TV.

Bulldog coach Kirby Smart knew about it, but No. 13 wasn’t about to bench himself. He’s a Bennett. Stetson IV is a competitor. You cannot hide his grit and gridiron DNA.

More than once, I’ve watched the grainy black-and-white game films of Stet’s granddaddy quarterbacking the Jesup Yellow Jackets. Buddy Bennett was a magician hiding the pigskin on his hip—rolling left and right on a bootleg—en route to a 1954 state championship.

No, sir, Stet wasn’t about to let a little vomit get in the way.

And when he pulled “a Buddy”—hiding the ball and scampering into the endzone—he wasn’t thinking about a queasy stomach. He was focused on scoring on that same turf, just as Buddy had done as quarterback of the South Carolina Gamecocks in 1960. Beyond that, Stet is determined to lead his beloved Bulldogs to another national championship. 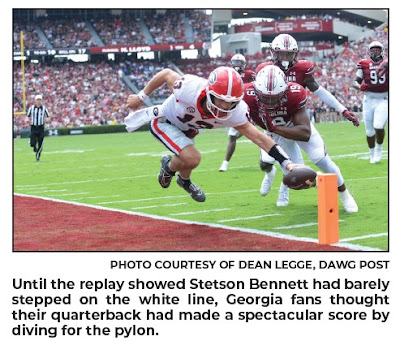 I was too young to watch Buddy play, but I got to know him when he came back to Jesup to coach the football team. I watched him with his four sons. He was tough—maybe too tough by some standards—but Buddy’s love for Rick, Stetson III, John and William was evident. He wanted them disciplined to never quit and to succeed. Buddy’s gone, but his boys are good men and overachievers.

Not gone is Buddy’s legend as a college coach. Two of my friends played for him. My high school teammate and quarterback Marcus Waters remembers his years at East Tennessee State, where Buddy coached the secondary.

Buccaneer strong safety Marcus told me, “Buddy demanded so much. He only accepted full speed.” Marcus said, “I watched him run off an All-American for loafing.” “Bennett’s Bandits” didn’t loaf. His 1969 defensive backs led the nation with 37 interceptions. Marcus said, “For every 10 passes thrown, we intercepted one.” Three of the picks were off future NFL Hall of Famer Terry Bradshaw.

The next year, Buddy was in Knoxville coaching for Bill Battle’s Tennessee Volunteers. In that defensive backfield was my friend David Allen, who just retired as an Athens urologist. David told me how he bonded with Buddy.

On the first day of practice, Buddy tested his players. One by one, guys quit or collapsed. David was the last of Buddy’s Vols standing. David and the defensive backfield also became “Bennett’s Bandits,” stealing 36 passes. A half-century later the folks around Rocky Top still remember 1970. And when Buddy’s sons Stetson III and William came through UGA, David bonded with them, too.

No, I’m not surprised No. 13 juked a little nausea in Columbia’s Williams-Brice Stadium. He’s a full-blown Bennett when it comes to having field-general savviness and being competitively tough.

With Georgia ahead, 38-0, Stet got a third-quarter rest but not before throwing two touchdown passes and running for another six points. Except for a smidge of sideline chalk on his cleats, Stet would have scored another when he dove for the pylon.

I’ve never liked the word “puke,” but if the doubters aren’t ready to believe in two-time MVP Stetson Fleming Bennett IV, guess what?

I’m about ready to throw up.