What would Teddy Roosevelt think about the Okefenokee?

None of us was around in 1901, when President Theodore Roosevelt used his iconic monocle to squint 121 years into the future. Just imagine if he hadn’t. How many millions of pristine acres would have been decimated, thus robbing generations of Americans of the awe and wonder that our national parks provide?

I repeat: “What if President Roosevelt hadn’t had the vision to peer beyond the early days of the 20th century?” The swashbuckling leader thought big, really big. Today the national parks system encompasses 423 units, scattered over 85 million acres in all 50 states; Washington, D.C.; and U.S. territories.

Our 26th president is remembered for many of his sayings. “Speak softly and carry a big stick” is just one. I like this: “The nation behaves well if it treats its natural resources as assets which it must turn over to the next generation increased, and not impaired, in value.”

Here in Georgia, we have three governmental bodies that are entrusted with our natural resources: the Georgia Department of Natural Resources (DNR) and the two General Assembly committees. The House and Senate each have a committee on natural resources and the environment. And don’t forget that under the DNR’s umbrella is Georgia’s Environmental Protection Division (EPD). That makes four should-be “watchdogs.”

Now, enter the controversy over the major titanium-mining operation—proposed by Twin Pines of Alabama—on the lip of the Okefenokee National Wildlife Refuge. It’s been a political football, punted to Washington and back to Atlanta, and none of our Georgia watchdogs has done so much as offer a yip to protect what cannot be replaced.

Well, I take some of that back. In the 2022 session, a widely supported bill was introduced that could have protected the Okefenokee. Without discussion or a vote, Rep. Lynn Smith (R-Newnan), chair of the House committee on natural resources and environment, killed the proposed bipartisan legislation. 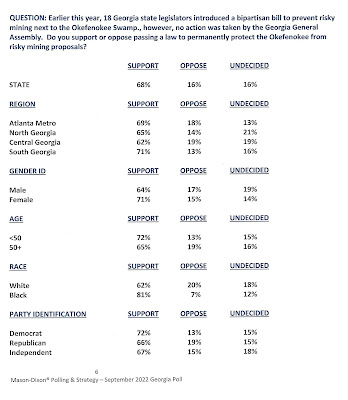 Between Sept. 6 and 8, 2022, Mason-Dixon Polling & Strategy Inc. of Jacksonville conducted a poll by contacting—live on the telephone—625 registered Georgia voters statewide. Seven questions concerning the proposed mining near the Okefenokee Swamp were asked. We chose one for illustration. Responses to all questions were overwhelmingly in support of protecting the Okefenokee.

If the DNR, the EPD or the General Assembly doesn’t have the foresight and gumption that Teddy had, who in Heaven’s name will? Teddy admonished, “Do what you can, with what you have, where you are.”

The Okefenokee Swamp is a natural wonder. You can’t go to a big box or click online and order another. Why, oh, why would we risk destroying something that is bona fide irreplaceable? There’s a one-word answer: money. Twin Pines is pouring massive amounts of money into lobbying its case in Charlton County, Atlanta and Washington.

Because Twin Pines intends to make millions from the pillaging of Trail Ridge along the Okefenokee boundary. But who’s listening to the damning science of the questionable venture? Apparently, no one in the right decision-making spots is willing to step up and say, “No, and hell no!”

Yes, impoverished Charlton County needs jobs and an expanded tax base. I get that. Georgia has one of the most powerful economic development teams in America, maybe the best. So, Atlanta, why not find an alternative to help our Folkston friends without doing irreparable harm to the Okefenokee?

If the Rough Rider were standing under the Gold Dome, would he be speaking softly?

But for sure, he’d be using his big stick to tap some common sense into the guardians of our natural resources, who could and should protect Georgia’s Okefenokee Swamp.