Fall is time to boil a pot of ‘country caviar’

Have you ever wondered why so many Northerners turn up their noses at boiled peanuts?

I can tell you why.

They have had the misfortune of buying a roadside bag of boiled peanuts that too often taste, well, awful. I am a peanut purist, especially when it comes to boiling goobers. Do not soak a bushel of dried peanuts in water, boil them in salty water, and then pass off the imposters as the genuine thing.

My love affair with peanuts goes back to the 1950s, when I used a pitchfork and helped stack peanuts on poles on my grandmother’s farm. After the peanuts dried, the vines—loaded with nuts—were fed into a stationary picker. You could almost see the dust cloud 4 miles away in Newton. (All that has long since been mechanized.) 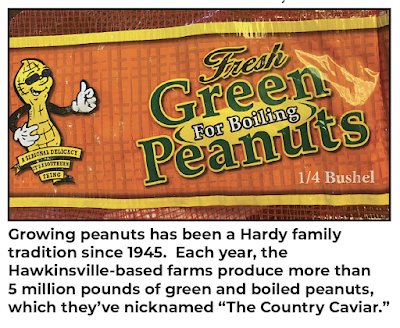 But the real event was pulling—by hand—a double armload of green peanuts, plucking them and rinsing off the Baker County sand. Next came the biggest pot in Nanny’s kitchen, the salty water, turning on the stove and the wait. Oh, the wait, as much as three hours.

For the record, I prefer the Valencia variety for boiling. For parching, it’s the smaller Spanish peanut.

Big Dink could eat his weight in boiled peanuts, as could his brother James. One year, I grew a patch. When the peanuts were ready, Mother and Daddy came to the farm. In a soft rain, I pulled the whole crop to make a mountain of vines in the back of a 1969 pea-green, step-side Chevy truck.

My folks sat under the pavilion and pulled off every peanut and washed them. Old-timers had all-day dinner on the ground. We had an all-day peanut picking and boiling. And, yep, I’m guilty of “stumping my toe” and putting a little too much Morton salt in the water. Hey, it’s not as though you eat boiled peanuts every day. But I could, hot or cold. Thank you, Lord, for freezers.

Now, back to those who scoff at boiled peanuts. I apologize for their misfortune of suffering through bags of crunchy, foul-tasting wannabes. Unless the roadside sign guarantees “boiled-green peanuts,” don’t stop. Speed up.

In 1969 I married a peanut farmer’s daughter. And when I planted my patch, Pam showed me the proper way to hoe the rows without chopping off the peanuts. After all, she was first runner-up in the 1968 Peanut Princess Pageant. I thought she deserved the crown.

These days, I’ve found a friend in the peanut business. I look for the Hawkinsville’s Hardy Farms label. Brad Hardy calls their luscious green peanuts “country caviar.” I like the catchy moniker, but I love what the Hardy family sells in those quarter-bushel red-mesh bags. Hardy’s green peanuts start showing up in select stores a tad before Labor Day. I aim to be one of the first customers.

On a ship, back from World War II in the Philippines, Daddy and some of his Southern buddies were peeling and chewing sugar cane. A couple of guys from the Bronx asked, “What’s that?”

One of the fellas cut off a couple of cane knots and handed them over. When the New Yorkers clamped down on the wood-like chunks, they spat and grimaced, “How can you eat something like that?”

When the knot-eaters left, someone piped up, “Good, that just gives us more sugar cane to enjoy.”

I feel the same way about boiled-to-perfection green peanuts. If you don’t like Hardy’s “country caviar,” that’s just more for the real connoisseurs to enjoy.