The epitome of quality time

On the hilltop, just above the hayfield, the October sun was starting its slide behind the hardwoods that were flirting with their fall colors. I’ve captured that scene dozens of times on my camera. But on this day, I was looking the other way.

Under the green boughs of a century-old loblolly, I was as relaxed as I ever get. The tailgate of the 2004 farm truck was flopped down. And I was flopped down on it, leaning back and soaking up a healthy dose of quality time. More than 20 years ago, I dreamed of moments like this. Norman Rockwell couldn’t have more perfectly painted what I was soaking in.

A tall, slender 18-year-old—with curly blond hair and eyes as blue as robin eggs—was flipping a popping bug onto the mirrored surface of the farm pond. Without stopping the swish, swish of his flyrod, Wyatt laughed and said, “Grandpa, I always wondered if I could catch one of your big old catfish with this.” There are plenty of 15-pounders lurking beneath the emerald waters.

After umpteen dozen swishes, I said, “Maybe you should try something different. Maybe a chunk of hot dog.”

“Not in my pocket, but what do you have in your Sequoia?”

The college freshman—with the help of his dad—built and installed a storage system in the back of his SUV that’s an outdoorsman organizational dream. As our first grandchild pulled out a bag from one of the compartments, he called out over his shoulder, “We made this so I can sleep back here, too.” And he has, along trout streams near Young Harris College. A special rack in the ceiling holds an assortment of fishing rods and reels. 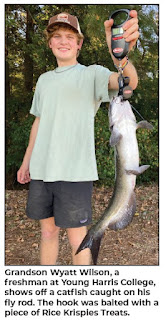 “How about this, Grandpa? Wonder if catfish like Rice Krispies Treats?”

“Only one way to find out.”

Pinching off a smidgen, Wyatt baited his hook and resumed flicking the line back and forth. The sticky goo stuck to the hook, but the catfish showed no interest.

“Let’s chum ’em up,” I suggested. When I tossed a scoop of floating-catfish food, fat blue cats swirled and splashed, as if they were a school of flesh-eating piranhas.

Wyatt’s rod bent into a long fiberglass “U.” Five minutes later, he yelled, “Toss me the net.”

Wyatt quickly weighed the fish, and I snapped a photo. Then he gently eased the 4-pounder back into the shallow water, as if he was releasing a prized mountain trout.

Watching Wyatt, I couldn’t imagine being any happier. But then he shifted topics. “Grandpa, I’ve been thinking about engineering,” he said. “Did you know Young Harris has a 3/2 program that would allow me to transfer to the University of Georgia? Three years at Young Harris to get a mathematics degree, and then two years at UGA to earn a mechanical engineering degree.”

With that, I sat up to hear more. Among the eight adults in our immediate family, there are 10 UGA degrees. Wyatt—just as his three brothers and four cousins will eventually get to do—made his own college choice. He thought UGA was too big. Young Harris “felt just right.”

Wyatt’s always been a thinker, a planner. He said, “Engineering really fascinates me.” Fortunately, he was gifted with some of his other grandfather’s Georgia Tech DNA—i.e., a fondness for calculus and physics. I told Wyatt about my time on the Board of Regents and how UGA almost didn’t get its coveted College of Engineering.

Wyatt may change his mind several times, but this will never change. I know that every uninterrupted moment with your grandchildren is the epitome of quality time.

Who knows, you might discover catfish have a sweet tooth for Rice Krispies Treats. And you might learn something else, too.