Pete Wheeler was a legend among Georgia veterans

Curiosity made me drive to Atlanta in 2011.  All these years later, I am still shaking my head—in amazement—about the legacy of Crawford’s native son, the late Pete Wheeler.

And today, when I drive down Bunker Hill Road and spot the weathered red barn of his grandfather, I smile.  As a boy, Pete worked on that farm, which is now being developed into Crawford Village. 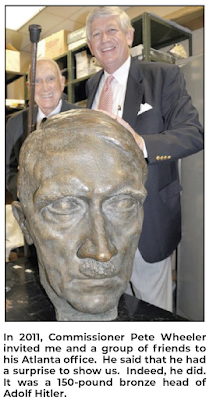 Friday is Veterans Day. Pete Wheeler was a legend among Georgia veterans.  He died in 2015, after serving 66 years as the commissioner of the Georgia Department of Veterans Service. Appointed to office by his UGA college roommate Gov. Herman Talmadge, Pete served 12 governors.  A plaza in front of the Sloppy Floyd Building—across from the state capitol—honors Gen. Pete Wheeler.

Eleven years ago, Pete had invited me, along with a few friends, to visit him on that September day. He promised a surprise.  And Pete’s vow made us curious enough to fight Atlanta’s maddening traffic and scavenge for parking.

Earlier in the morning, I was with former U.S. Sen. Sam Nunn.  When he heard that I was on the way to see the commissioner, he said, “I love Pete Wheeler.  Please tell him that’s he’s the best.  Give him my regards.”

Love and respect: two powerful words from one of our nation’s most powerful and revered leaders.  And it didn’t take more than a few minutes, after stepping into Pete’s world, to understand how and why the senator felt that way. 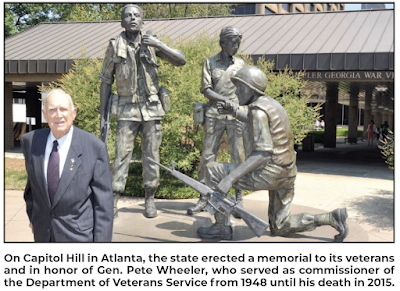 Inside the Department of Veterans Service is a wall-to-wall tribute to the men and women who risked their lives for our freedom.  History oozed from every inch. Pete told us that Georgia has the nation’s largest number of military retirees and the fourth-largest active-duty population. His duties spanned across the state.

Once, I addressed him as “commissioner.”  Another time, I called him “general.”  The 89-year-old waved his cane and said, “Just call me Pete.” He was born in 1922, the same year as my father.

The visit with Pete was a stroll through history. I wanted to record everything he said.  Pete told of witnessing Richard B. Russell sworn in—in 1930—as Georgia’s youngest governor.  As he talked, behind him was a flag that Georgians had carried in the Spanish-American War. With a tap of his cane, he pointed to one relic after another.

And then he stopped, flashed a devilish smile and asked, “Are you ready?”

Curiosity was “killing our cats,” so we answered in a chorus, “Yes!”

Single file we marched, wending through a labyrinth of veteran records and memorabilia.  “Here we are,” Pete said. “We’re in the Hall of Dishonor.”  Again—with his cane—the general tapped on the door of a nondescript metal storage cabinet. And there it was on the bottom shelf—Adolf Hitler’s 150-pound bronze head, draped with a Rich’s shopping bag.

Pete explained that when Allied troops captured Berlin in World War II, American soldiers toppled the Nazi leader’s giant statue.  A Georgia GI hacksawed off the murderous dictator’s bronze head.  Somehow, the macabre souvenir got through customs and into the hands of Georgia’s secretary of state.  Ben Fortson then handed it off to the commissioner of veteran services.

Because it was an eerie reminder of Hitler’s hateful reign, Pete decided to stuff the heavy head into a dusty “chamber of dishonor.”  And there it had been for all those decades.

Pete Wheeler had piqued our curiosity.  And he did not disappoint with his stories and the grand-finale surprise.  No wonder veterans loved and treasured him.

Today a new curiosity is “killing my cat.”