In sports lingo, it’d be a highlights reel. For me, it’s more of a mental scrapbook. I remember that Oct. 8, 1966, Saturday afternoon. As a 17-year-old UGA freshman, I was sitting on a baking-my-bottom aluminum bleacher on the sunny side of Sanford Stadium and cheering for my first-ever Bulldog team.

There he was—Vince Dooley. The 34-year-old animated coach looked as if he could shuck his coat and tie and put on a helmet and run into the Ole Miss game. In time, I’d get to know many of the Bulldogs on that roster—Billy Payne, Kent Lawrence, Kirby Moore and others. But I had no idea—on that hot fall day—that I’d become friends with the winningest coach in Georgia football history.

Our friendship wasn’t unique. Legions of people can attest to Vince Dooley’s engaging personality. I knew the 90-year-old legend’s health was failing, but his death was a surprise. The sad news came while I was driving. Mile after mile, I scrolled through my mental scrapbook. Here’re some sample pages:

§  About 10 years after victory over Ole Miss, Vince and I shook hands on Jekyll Island. Loran Smith, then secretary of the Bulldog Club, and Dr. Hurley Jones persuaded me to take the gavel as president of the Southeast Georgia Bulldog Club. That’s how I got to know Vince, Barbara and their children—Deanna, Daniel, Denise and Derek.

§  Not long thereafter, Coach Dooley; his top recruiter, Mike Cavan (quarterback of the 1968 SEC champions); and I were huddled in Jaycee Stadium’s press box. They had come to watch the Wayne County Yellow Jackets host the Valdosta Wildcats. Make no mistake, they had their eyes on Valdosta’s hotshot quarterback, Buck Belue. But what they saw was Jesup’s Billy Lott fake a punt and pass to Donnie Palmer, who streaked—untouched—for about 75 yards. Vince, Mike and I almost jumped out of the press box. Oh, yeah, Jesup won, 15-14. 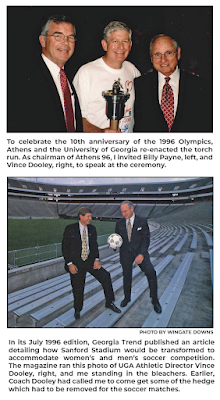 §  One day, Dr. Hurley Jones called. He said that Vince wanted me to go with him and Jesup coach John Donaldson to visit Lindsay Scott. (Both Doc and John had played for another Bulldog legend—Wally Butts. John was on Vince’s first Georgia coaching staff.) I sat in the backseat of Hurley’s Cadillac, giving directions to the Scott home on State Street. When we got there, Lindsay—wearing a No. 24 Tennessee-orange jersey—was shooting hoops in the driveway. When he saw us, he bolted, almost as fast as he did in Jacksonville, when Larry Munson begged, “Run, Lindsay, run!”

§  Recruiting rules were different back then. All we did was to convince Lindsay that more of his family and hometown fans would see him play in Athens versus Knoxville. Especially in Jacksonville. And how could any of us forget Vince sprinting down the sideline—with Lindsay—to the Gators’ endzone?

§  Shortly after the Dawgs won the 1980 national championship, Dr. Fred Davison, then UGA president, appointed me to the athletic board. I got to know Vince even better. In real scrapbooks, I have photos of him catching Altamaha River Swamp bluegills and warmouths. I was honored to paddle the boat. And there was the quail-hunting trip to Shirahland, Pam’s family’s hunting preserve. Vince and I shared a love of the outdoors.

§  The 1996 Olympics alone is a scrapbook. I remember an athletic board meeting at the King & Prince on St. Simons. Somehow, I wound up on a balcony with Vince and Billy Payne. I can still hear Vince—with his signature raspy voice—teasing, “Billy, old boy, I thought all those licks to the head that you took playing football had gotten to you.” Of course, Vince was with Billy, in Tokyo, when the world heard, “It’s Atlanta.”

§  Vince reminded Billy, “Don’t forget Athens and the University of Georgia.” As chairman of Athens 96, I worked with Vince for four years. One day, he called, saying, “Hey, we’re taking out the hedges for soccer. I thought you might like to have some of them.” A few years later, I reported, “Coach, you ought to see my hedge. It’s really doing good.” Vince quipped, “I don’t want to hurt your feelings, but you can’t kill privet hedge.”

The celebrated coach, administrator, historian, author and gardener was right. I know this to be true, too. I was one of the fortunate thousands who were befriended by Vincent Joseph Dooley.

And just as those hallowed privet hedges—surrounding Sanford Stadium’s Dooley Field—can’t be killed, you will never destroy my treasured “scrapbook” memories of my friend, “Coach.”