The Great Depression had America’s stomach gnawing on its backbone. Jobs were hard to come by, but the two youthful brothers always found work. Even as boys, they realized the need to shoulder their share of responsibility to keep food on the table.

Their mother had died in 1933. Their father had a job—a pretty good railroad job—but he provided marginal support. The oldest child, a daughter, left home as soon as she could. The younger daughter, a high school graduate, had a job. Her telephone-company paycheck was critical, but her determination to hold the motherless family, including a 6-year-old boy, together was more important.

The brothers shared a job at a dairy. They took turns on the home-delivery route. Legend was that the one making deliveries got to wear the also-shared pair of high-top tennis shoes. The pay was meager, but a fringe benefit—a daily quart of milk—was huge.

One day, a peddler came by Shedd’s Dairy, selling navel oranges. The younger brother had never seen such large and luscious-looking oranges. He asked, “Mister, do you think I could have one of those big oranges?”

“I won’t give you just one,” the stranger said. “But I will give you a dozen if you’ll eat them all right now.”

The boy wasn’t that hungry, but he couldn’t pass up the chance to taste those navel oranges. One by one, he peeled and ate all 12. Years later, when my dad had a family of his own, he loved to tell us about the time that he ate a dozen oranges. The remembrance usually came when he was peeling navel oranges for our traditional Christmas ambrosia. Always, he punctuated the story with a laugh.

Several years ago—on an experimental whim—we planted three Satsuma orange trees on the edge of a pine plantation. The strategy was to protect the “Florida fruit” from colder South Georgia weather. Satsumas are in the Mandarin orange family and easy to peel, much like a tangerine. 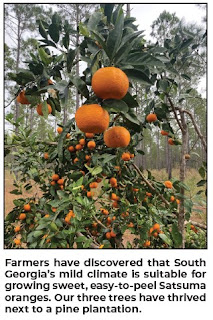 Within two years, the trees were producing. And then the production exploded. This fall the limbs were groaning to hold the bounty. Some limbs snapped. I must do my homework before next season.

Two days after Thanksgiving, I decided to finish the harvesting of our mini grove of oranges. I guesstimate that I had picked almost 1,000 Satsumas over the past month. I also had learned that you can’t pluck the oranges. You must snip each stem or risk pulling off a patch of the peel.

Several times, I didn’t follow my own advice, and I pulled off a patch of the thick peeling. Rather than put the damaged orange into a 5-gallon bucket with the good ones, I took a break and enjoyed the “fruit of my labor.” And every time that I ate an orange, my thoughts drifted back to the navel-orange story that I had heard so many times.

Since we are still in the season of thanksgiving, I am grateful that my Aunt Sue kept her younger siblings together under one roof. Even as a teenager, she was a remarkable woman. Uncle James and his younger brother, my dad, were two of my heroes. Their hard work during the Great Depression did not depress them. Instead, they developed a remarkable sense of humor.

I can hear them laughing now.