True or false: “Ignorance is bliss”?

If that was true, I was blissfully ignorant—nestled in my Strand Theater seat—watching cowboy-and-Indian movies during my boyhood Saturdays. And how many times, in backyard play, did you choose to be a cowboy rather than an Indian?

Hollywood’s filmmakers influenced us to make that decision. Years later, I realized that I had been duped into believing cowboys were the heroes and the Indians the enemies. Who among us wouldn’t go on the warpath if our homeland was being invaded and our way of life destroyed?

In this modern era of communications, magnified by social media, misinformation is spewed 24/7. As I am bombarded by political and corporate propaganda, I remember an often-repeated phrase from those 1950s matinees. After a Native American chief realized that he had been duped, he would bemoan, “White man speak with forked tongue.”

In no way do I want to disrespect Native Americans. They were here before us, and their heritage should be honored. But if the forked-tongue line was created in Hollywood, Native Americans should claim it. Indeed, too many of our ancestral leaders fed tribes of Native Americans saddlebags full of lies.

I choose the environment.

Our natural resources are gifts from God. He expects us to be responsible stewards. That requires unpolluted soil to grow what we eat. And what parent wants their child to drink tainted water? Don’t families of Republicans, Democrats, Libertarians and others deserve to breathe healthy air, too?

If so, why make the environment a political issue? Too often the politicians who balk at stringent laws that protect our natural resources bark, “Government overreach!” Are these examples overreach?

§  Safety standards for food and medicines

The goal is to protect us and save lives. Common sense suggests that regulating the safe stewardship of our natural resources is a necessary government function, as well. But that’s not always the case when arrogant entitlement is fueled by ungodly amounts of money available to lobby for more corporate profits. I am a staunch believer in profitability. Healthy profits create and support jobs, but sheer greed is shameful. 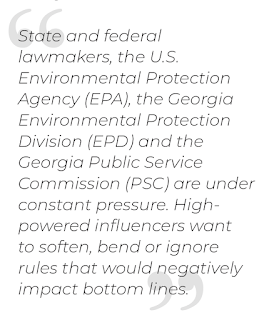 After decades of burning coal to create electricity, consider how Georgia Power intends to manage its toxic waste. For too long, we were blissfully ignorant of the environmental dangers of coal ash. Georgia Power earns high praise for abandoning coal in favor of safer alternatives. But that’s just one step in the right direction.

Only 21 of Georgia Power’s 29 leaking-into-groundwater coal-ash ponds are being drained and put in lined-dry storage. The “A-Citizen-Wherever-We-Serve” corporate giant plans to cap and leave in place 8 of its leaking impoundments. The strategy is to wait and see what happens. Here’s the “bottom line” on that: One pile of toxic coal ash in drinking water is unacceptable.

The EPA has just instructed Ohio to clean up 100 percent of its leaky coal-ash messes. Georgia Power is balking, thinking that directive doesn’t affect its risky ponds. I have an opinion about that selfish attitude.

Beware of the propaganda spin-masters—compromised lawmakers, greedy industrialists or their hired-gun lobbyists—if they tell you that time will heal a toxic coal-ash sore. Take it from Hollywood’s Native American chiefs. Those people speak with “forked tongue.”