‘Stetson Bennett is the American Dream’

Before you go there about “sour grapes,” stop. This isn’t about Stetson Bennett’s not winning the Heisman Trophy. Instead, it’s about the magical story of an undersized and misjudged walk-on quarterback who was voted to be among the four best college football players in America.

But hold that sour-grapes thought for later.

Southern Cal’s Caleb Williams dominated the balloting. That was no surprise. But Stetson got to stand shoulder-to-shoulder on that coveted New York stage with Williams, Texas Christian’s Max Duggan and Ohio State’s C.J. Stroud.

Name the quarterbacks among UGA’s greats who have been invited to the Heisman ceremony. NFL Hall of Famer Fran Tarkenton wasn’t. Elite signal callers Eric Zeier and Aaron Murray weren’t, either. Don’t forget All-American Matthew Stafford, the first pick of the 2009 NFL draft. Matthew wears a 2022 Super Bowl ring, but he wasn’t a Heisman finalist.

And now comes Stetson, who grew up—deep in South Georgia’s gnat country—dreaming of playing Between the Hedges. “I never thought about the Heisman,” he said. “I just wanted to be quarterback at Georgia.” While skeptics barked their doubts, Stetson Fleming Bennett IV didn’t need reminding that he was an underappreciated underdog. 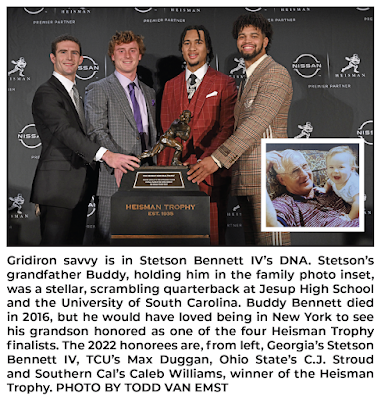 No. 13 just knew that he had to hustle hard enough to convince Coach Kirby Smart and his teammates that he could lead the Bulldogs to victory. Even while the doubters continued their grumbling, Stetson made the ones who mattered into believers. His coach told Heisman’s national audience, “Stetson Bennett is the American Dream.”

The records bark the loudest. Back-to-back undefeated seasons are a start. How about offensive MVP honors in the Orange Bowl and the National Championship game? I repeat: the National Championship game, beating Alabama, 33-18. Follow that by being named offensive MVP in the 2022 SEC championship game, after rifling four TD passes and in the trouncing of LSU, 50-30. The Athletic, a national digital sports magazine, just named Stetson its “College Football Person of the Year.”

While Stetson was in Arkansas accepting the Burlsworth Trophy—honoring the nation’s top football player who began his career as a walk-on—Stetson III’s cell phone vibrated. Stet told me that he almost ignored the call. Rob Whalen, executive director of The Heisman Trophy Trust, was inviting Stet IV to New York for Dec. 10’s banquet. Stet, along with sons Luke and Knox, kept the secret until the Burlsworth ceremony was over. One day, we’ll see the video of the trio breaking the news to No. 13.

Consider the criteria for selecting the best-of-the-best recipient. The Heisman is given to the player “whose performance best exhibits the pursuit of excellence with integrity” and who “epitomizes great ability combined with diligence, performance and hard work.” When you view Stetson’s complete body of work—from where he started to where he is now—I believe he checked every single box.

But I didn’t get to vote. And as Stetson said, “I never thought about the Heisman.” For him, New York’s magical moments are history. The dreamer and his teammates are back on the practice field with their coaches. Stetson is beamed in on the New Year’s Eve Peach Bowl. If the Dawgs are to win back-to-back national titles, they can’t look past C.J. Stroud and Ohio State’s powerful Buckeyes.

In fact, Max Duggan, C.J. Stroud and Stetson Bennett are getting to do something this year’s Heisman Trophy winner only wishes that he could. Caleb Williams won’t be competing for the national championship that will be played almost in USC’s backyard. For Caleb and the Trojans, that’s a whole SoFi Stadium full of “sour grapes.”