Everyone else had left our Prince Avenue office.  Looking out the window, I saw that the icy downpour had ebbed to a drizzle. I grabbed my coat, my briefcase and an umbrella.  When I stepped outside, the chill drilled right through my overcoat, my clothes and my skin—straight to the bone.

Shivering inside the car, I flipped the toggle switch to heat the driver’s seat.  While waiting for the engine to warm, I muttered, “What miserable weather.”  Once out of the parking lot, I changed directions.  Usually, I turned right.  But that time, I wheeled left.

Waiting at the traffic light, I glanced up the hill.  In the dark spot between the streetlights, I saw a shadow trudging up the steep sidewalk.  Watching the slow-moving hulk, I rolled the heater’s thermostat higher.  The red light flicked to green, and I started home.

At the next corner—on impulse—I turned right.  And then two more rights.  That’s when I saw the shadow, again.  As the figure crept forward, I could see a stocking hat pulled over his ears.  In an hour, the rain dripping from his salt-and-pepper beard would be icicles. I recognized the ebony Grizzly Adams-like figure, but I didn’t know his name.

Pulling alongside of him, I called out, “Are you hungry?”  After a moment of studying me, a “yup” rumbled through his deep-bass vocal cords.  “Me, too,” I said.  “Let’s have supper over there.  I’ll meet you at the Huddle House.”  By the time I had parked, he was walking up.

I stuck out my hand and introduced myself.  “I’ve seen you in the neighborhood for years,” I explained, “but I don’t know your name.”  “Tommy,” he said.  As we chatted, he gradually shifted his eyes to look into mine. “Do you know Steamboat?” I asked.  “Yup,” he said. Holding up two side-by-side fingers, he said, “Boat and me are just like this.” Holding up two side-by-side fingers, I said, “Good. Boat and me are just like this.”  Steamboat did odd jobs in our office complex.

When we settled into our booth, I asked Tommy what he had had for breakfast. He shook his head.  How about lunch?  He shook his head, again.  In between bites of a T-bone steak, two fried eggs, hashbrowns, grits, four pieces of toast and a glass of iced tea, Tommy told me his story. He had lived on the street for 17 years.  His blanket and a few belongings were stowed in plastic trash bags in the bushes on a nearby vacant lot. 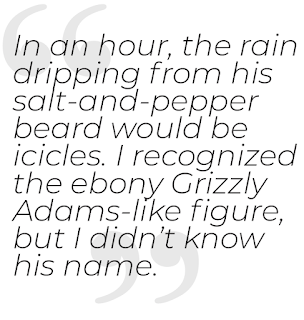 Tommy could tell I was distressed.  He paused and flashed a gap-toothed grin, “I always look up, never down.”  Glancing toward the Huddle House’s ceiling, his charcoal irises sparkled in a pair of bloodshot seas.  “Do you know what’s tomorrow?” I asked.  With an even bigger grin, he wiped the grits from his moustache and said, “Christmas.”

Pulling away from the Days Inn, 14 years ago, I cut off my car’s heater and slid the windows down.  Covered with chill bumps, I drove home, reflecting on my chance encounter. Tommy is gone, but I don’t want to ever forget that I have a roof over my head and a warm bed.

Not just on Christmas Eve, but every night.