If you were barking for the Georgia Bulldogs in 1980, you know who growled those words in Jacksonville. And you know where you were on Nov. 8, 1980, when Buck Belue hit Lindsay Scott—over the middle—and No. 24 raced past the orange-and-blue Gators to the Florida end zone.

We were sitting next to Buck’s grandparents, high up in the Gator Bowl. I was holding a tiny transistor radio to my right ear when Larry Munson gasped and gushed those miraculous words. I still get goosebumps listening to the replay.

On New Year’s Eve, grandson Hayes Wilson and I were sitting in Section 112-C, Row 14 and Seats 5 and 6 inside Mercedes-Benz Stadium for the Peach Bowl. And when Jack Podlesny missed his first field goal, I could hear the immortal Munson groan. “This is a bad omen,” I said to Hayes.

For three quarters, I feared the omen was playing out. Jack Podlesny, our ace placekicker, missed his first two field goals, while Ohio State’s CJ Stroud slashed our secondary with surgical passes. And to twist the knife deeper into Bulldog hearts, the Heisman Trophy finalist ran wild through our defenders. Each time the Buckeyes embarrassed our vaunted defense, I shook my head.

Shame on me, but I couldn’t believe what was happening. The Buckeyes could do no wrong, and the Dawgs were struggling to do much of anything right. Of course, I knew better. How could any of us forget that Jacksonville miracle?

And what about the 2018 Rose Bowl? I still have our Tunnel 3, Row 56, Seats 10 and 11 tickets to “The Granddaddy of Them All.” If any game has ever rivaled Larry Munson’s begging, “Run, Lindsay, run,” it’d be our double-overtime win over Oklahoma, 54-48. We didn’t jet back to Atlanta. We floated, above the clouds, basking in UGA ecstasy.

The Sooners’ quarterback was Heisman Trophy winner Baker Mayfield. But the Bulldogs were ready. Walk-on Stetson Fleming Bennett IV dazzled his teammates and coaches by mimicking Mayfield. Stetson didn’t take a snap in that game, but he contributed—in a big way—to the victory. 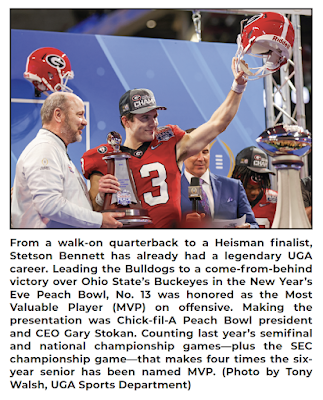 Stetson took every snap in the Peach Bowl. And when things weren’t going so well for Stet and the Dawgs, two strangers, who were sitting next to Hayes and me, kept howling, “Take him out!” Enough was enough, so I leaned over and said, “Stetson’s family and my family have been friends for four generations. The game’s not over yet. We’ve got the fourth quarter.”

Sure enough, Stetson went 10 for 12 passing in the final period. “Pod” found his magic again. The Dawgs came from behind, outscoring Ohio State 18-3. With less than a minute left, No. 13 rifled a corner-of-the-endzone TD to AD Mitchell. “Pod” punched in the PAT to put Georgia on top 42-41. Cheering the loudest were the former critics to my left.

Fifty-four seconds was all Stroud needed to look like Superman. The Buckeyes were in position to win. But a millisecond before midnight, Noah Ruggles’ 50-yard field-goal attempt fluttered wide left. If Larry has been in the broadcast booth—in a hoarse voice—he would have declared, “Old Lady Luck was wearing Red and Black tonight!”

Pushing through the exiting pandemonium, Munson was barking inside my head: “Dawgs on top! We were gone. I gave up. You did, too. We were out of it and gone. Miracle!”

The Dawgs aren’t out of miracles. Neither is their former walk-on quarterback. I sense another omen. Stetson’s storybook career is scripted for Tinseltown. But first, bring on TCU’s Horned Frogs.