My advice to Stetson Bennett was wrong

I could say it 100 more times, and “wrong” would be the right assessment. After last year’s thrill of Georgia’s winning its first national championship in 41 years, I had some advice for Georgia’s quarterback Stetson Bennett IV. The intermediary was his father, Stetson Bennett III.

No. 13’s dad and I go way back, as do four generations of the Bennett family. That’s why I felt comfortable having a conversation with Stet III. I am hometown-proud and protective of overachievers from our southeast corner of Georgia.

I will never forget the morning that Stet III and IV huddled with me in a breakfast booth in the Mayflower in downtown Athens. Stetson wanted me to spend some time with his son, the “Mailman” of the Pierce County Bears. Despite IV’s flashy high-school success, the Bulldogs weren’t offering him a scholarship. He had tickets to ride with smaller schools, but Stetson had no interest in those.

There was nothing that I could do but listen. And what I heard was an exceptional young man—athlete and otherwise—talk of his dream, his passion, to be a Georgia Bulldog. You know the story, the one that is scripted for Hollywood. He spurned other offers to walk on where his heart had been since he learned to talk and chant, “Go, Dawgs! Woof, woof!”

Somewhere, in a file somewhere, I have an old-school calendar with a date circled and penciled in, “7 a.m. Breakfast. Bennetts. Mayflower.” Since that morning, I have been a Stetson Bennett IV believer. You know the twists and turns over the past six years. 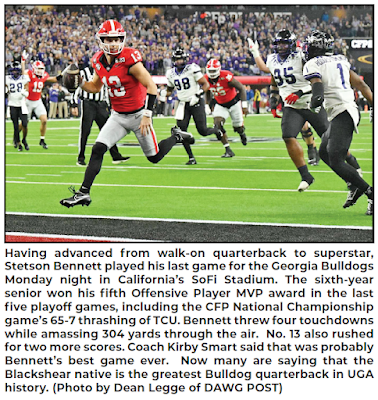 You also know what’s happened over the past two years. Still a legion of Red and Black barkers—up to Monday night’s game—wasn’t so sure No. 13 was the right quarterback for Georgia. Maybe Stetson’s unsinkable spirit, leadership, gaudy record-breaking stats, five MVP trophies and back-to-back national championships will change their minds. What’s clear is that Stetson’s coaches and teammates love him. Add millions of others to that list. And before Stetson ever took a quarterback’s snap, I loved him and his dream. That’s why I must confess that I gave some bad advice to his father.

I was wrong to suggest Stet IV cap his collegiate career with the 2021 National Championship. When you are on top is a good time to walk away. I thought the risk/reward equation was out of balance. There was more downside to No. 13’s return than upside. Stetson could get hurt. The season might not go as well. He could lose his starting position and tarnish what he had already accomplished. Capitalize on the value of his storybook life. It’s Tinseltown-bound. One day he could land a Kirby Smart-kind-of $100 million-dollar coaching contract, too. Nothing but blue skies ahead.

My friend listened. Politely, Stetson said, “Thanks. Stet’s 24 years old. He’s a man. I trust him to make the right decision. Some believe that he could be the Herschel Walker of this generation.”

Imagine what could or would have happened if Stet had taken my advice.

The Bulldog Nation and I are ecstatic that No. 13 came back.

After Georgia’s 65-7 shellacking of TCU, ESPN’s Rece Davis announced to his TV audience, “Stetson Bennett is an all-time legend.”

Last January, I was wrong to be overprotective.

So, when you are wrong, it’s best to admit it.

And Stetson III and IV, you have my apologies.