Triumph and tragedy in the Bulldog Nation

Charles Dickens, circa 1859, said it best in A Tale of Two Cities, “It was the best of times … it was the worst of times.”  One hundred and sixty-four years later, the novelist could have been talking about the Bulldog Nation over the past weekend.

Saturday afternoon tens of thousands of Georgia fans flocked to the streets of Athens and Sanford Stadium to celebrate back-to-back national football championships. It would be hard to imagine the Red and Black more exuberant.  Indeed, it was the “best of times.”

But by Sunday morning, the triumphant mood swung 180 degrees in the opposite direction.  It was the worst of times.  Tragedy struck, claiming the lives of Bulldog lineman Devin Willock and UGA athletic-department staffer Chandler LeCroy. Injured in the wreck were Bulldog tackle Warren McClendon Jr., who had just announced his plans to enter the upcoming NFL draft, and Tory Bowles of the football-recruiting staff. 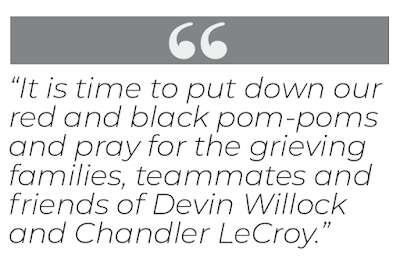 It is time to put down our red and black pom-poms and pray for the grieving families, teammates and friends of Devin Willock and Chandler LeCroy. At the same time, we need to show our love for Warren McClendon Jr. and Tory Bowles. Together is how the Bulldogs claimed those championships. Together is how we will find the strength to endure these worst of times.

Stetson ready to chase next dream

(Ninety-five percent of this segment was written before the Sunday-morning news that broke the Bulldog Nation’s hearts. Within seconds, on a late-night road, an automobile wreck wrecked the lives of so many. The parade and Sanford Stadium celebration seem irrelevant compared to the tragic losses.)

Stetson Fleming Bennett IV’s walk-on-to-superstar story is well-scripted for books, documentaries and the big screen.  Just as thousands of others have, I took a special interest in Stet’s dream to quarterback the Georgia Bulldogs to a national championship.  Six years ago—over breakfast in Athens’ Mayflower Restaurant—I saw the fire and hunger in his eyes as he laid out his dream.

Now we know that Stet one-upped his boyhood dream by leading the Dawgs to back-to-back national championships. Before last Saturday’s celebration, I penciled this timeline:

§  2017 Turns down numerous offers to play for Harvard, Yale and others

§  2017 With no scholarship, chases his dream by walking on at Georgia

§  2019 Returns to the University of Georgia on football scholarship

§  2023 Plans to pursue his dream by entering NFL draft

Ever since listening to my mother read The Little Engine That Could, I’ve been a fan of underdogs.  If there was ever an underdog who strapped on a football helmet, it’d be No. 13, the “Mailman,” whose family’s roots are Little Creek-deep in Wayne County.

I can’t wait to read the next chapter in Stet’s incredible story or wonder whether the Dawgs will three-peat a national championship.

And the Bulldog Nation must, too.

Even in these “best of times,” it is the “worst of times.”

Now is a time to grieve.

A time to pray for God’s healing hands.

A time to vow to never forget the young lives lost.