Gambler or not, here’s a safe bet 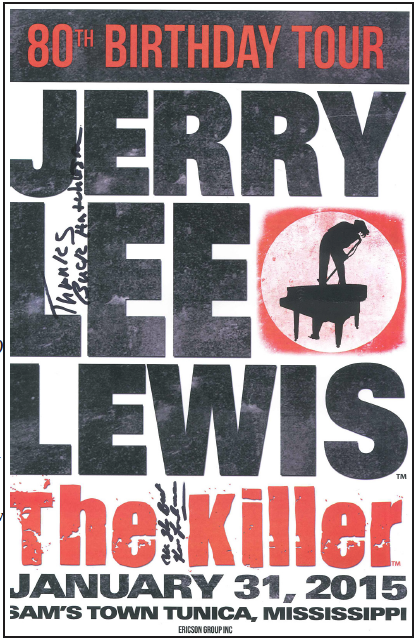 Like a giant, blinking neon magnet, the casino lights were beckoning: “Come on in, come on in!”  New Orleans is a seductive city, so my friend asked, “Do you gamble?”
“No!”
“Really?”
“Well, yes.  I open the doors of my business every morning.”
“That’s me, too.”
Laughing, we kept our hands and our wallets in our pockets, as we strolled through the mammoth gaming hall on the way to a pair of Big Easy shrimp po boys. That was 15 years ago.
But last October—after reading Rick Bragg’s book on Jerry Lee Lewis—I couldn’t resist the urge to roll the dice. I bet that Jerry Lee would be alive on Jan. 31, 2015.  If you know much about the you-can’t-make-this stuff-up life of The Killer’s 79 years, you have to wonder if he’d be breathing, let alone pounding out “Great Balls of Fire” on a piano.
Since he shook my nerves and rattled my brain in the 1950s, I was determined to see Jerry Lee before it was too late.  With a few clicks of the keyboard, my bet was placed.  Seconds later, my computer paid off with tickets.


The closer the end of January came, the more I wondered if Jerry Lee would really be in Tunica, Miss.  All I could do was wait and hope.  In a minute, I’ll tell you how the gamble turned out.
Have you ever been to Tunica?  If you are a smoker, Tunica is for you.  But if you’re not, be ready to drop into a firefighter’s crawl to get under the blue haze of cigarette smoke.  I’d just as soon lick 100 ashtrays as to go back to Tunica.  And that’s taking nothing away from the risk somebody took building high-rise resorts in the middle of Delta cotton patches, 40 minutes south of Memphis.
Have you ever been to the Mississippi Delta?  This was my second trip, and I still marvel at the long, long stretches of farmland—mostly cotton—on the flat, flat black dirt.  The earth is very rich, and many of the people are very poor.  Gambling, I guess, was to be the new cash crop.
I don’t know what I was expecting, but I was surprised to see the resorts sprouting out of nowhere along the river.  Rather than confined to one area, casinos were in small clusters, miles apart.  I guess I was so eager to see Jerry Lee that I really never concentrated on much else.
But once inside the casino where the concert was to be, my eyes started stinging, and I started coughing.  The second-best news of the night was that the actual performance arena was smoke-free.  And the best news was that Jerry Lee was in the house, ready for the show.
Our second-row seats were less than 30 feet from his ebony Yamaha grand piano.  As it was with Tunica, I wasn’t sure what I was expecting.  But when The Killer, in a black suit and white shoes, shuffled through the side curtains, I was startled.  Jerry Lee was stooped, taking baby steps across the stage.  “Oh, no, he might not make it,” I thought.  But I was wrong.  Once he slid onto the bench, the near-dead came to life.
For 40 minutes, Jerry Lee’s right leg bounced to the beat, as his fingers blurred up and down the 88 keys.  I can’t imagine the electricity he generated in his prime.  But at nearly 80, The Killer was surging with 440 volts, and there was “a whole lotta shakin’ going on.”  Two thousand people, like me, had bet on Jerry Lee and he paid off—big time.
Back in the day, parents thought his raucous music would take their children straight to the devil. And with all his wild shenanigans, some wouldn’t wager on Jerry Lee’s making it to heaven.  But after witnessing The Killer “kill it” in Tunica, I’d bet all the cotton in the Delta that his piano will.
Why?


Because he played the hell out of it.