In memory of J.W. and Cora Lee Fanning, here’s a trilogy of his lovebird stories 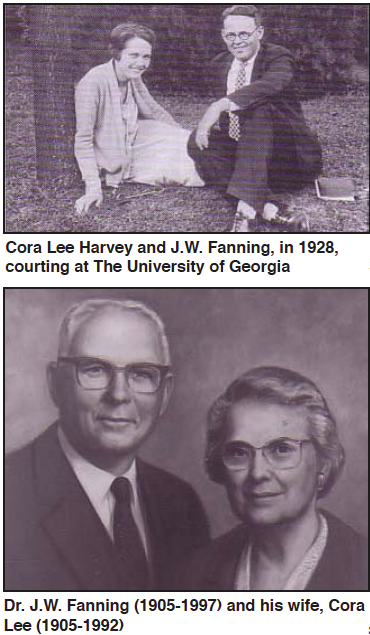 Shhhhhh, listen.
Can you hear them?
Lovebirds are singing their songs today, and I’m remembering two lovebirds who spent 62 years together.  If you knew J.W. and Cora Lee Fanning, you knew they adored each other.  Cora Lee was high-energy and apt to say whatever was on her mind, often bringing a wave of laughter.  J.W., a retired University of Georgia vice president, was soft-spoken and pensive, but he loved a belly laugh as much as anyone.  I can hear him—right now—getting tickled telling one, from his plethora of funny stories, about lovebirds.
For Valentine’s Day 2015, here’s a J.W. trilogy:
John and Martha had just started courting.  One Sunday afternoon, John invited Martha to take a ride through the countryside in his new Model A Ford.  With the top down, they puttered here and there, taking in the scenery.  Turning down a shaded lane on his farm, John pulled over to the side of the road and switched off the engine.
Leaning over, he pointed out two mules in the pasture.  The mules appeared to be necking, showing unbridled affection for each other.  John said, “See there, Martha, I wish I could do that.” Martha turned to John and said, “Go ahead.  You don’t need my permission.  They are your mules.”
I can see J.W.’s devilish smirk and hear his hee, hee, hee.
A few years later, John and Martha were married.  On a warm, sunny afternoon, they were back in his Model A, putt-putting around the county.  While driving, they talked about lots of things, going back to their early courting days.
Reminiscing and laughing, they kept motoring along.  With her back to the passenger-side door, Martha looked over at her husband and cooed, “John, I do love you.”
John said, “I love you, Martha.”
“And, John,” she said, “don’t you remember those old days when we rode along, all snuggled up next to each other?”


With his hands gripping the steering wheel, John looked over at this bride and said, “Martha, I ain’t the one who moved.”
J.W.’s eyes twinkled when he delivered that punch line.  And I can hear Cora Lee cackling.
Now, fast-forward a few more decades in the lives of John and Martha.  The two 90-year-olds are still in love, and J.W. sets the scene.
After supper, John helps Martha wash the dishes.  She compliments him on how thoughtful he is, after all these years.  John gives her a hug, and they settle in on the couch to watch TV.  After a couple of hours, John has started to nod, followed by an occasional snore.
Martha leans over and gently kisses John on the cheek.  “Let’s go to bed,” she says.  With their flannel PJs on, they climb into bed.  Martha wants to talk.  John struggles to stay awake, but he listens as his wife of almost 70 years recalls the days of their courtship.  They laugh about the “kissing” mules and other comical times in their earlier days.
When John reaches to turn out the bedside lamp, Martha isn’t done talking.  She said, with a snicker, “John, you remember back when?”
“Yeah,” he said.  “I remember.”
“And, John,” she said, “do you remember about now, you’d be nibbling on my ear?”
“Yeah, “he said.  “I remember.”
With that, John bolted upright and his feet hit the floor.  As he was shuffling down the hall, Martha cried out, “Wait, John.  Where are you going?”
Looking back over his shoulder, he hollered, “I’m going to get my teeth!”