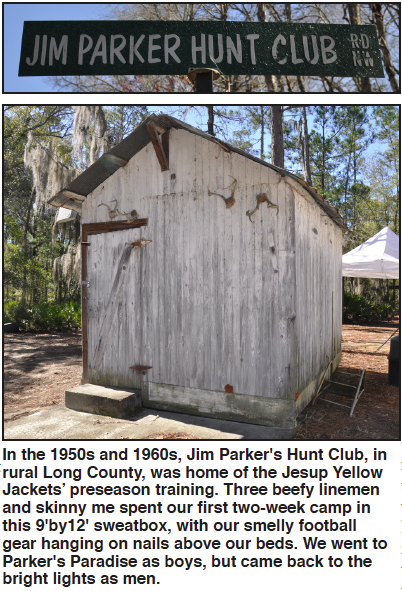 How do you get to the backside of nowhere?  Here’s how.  I was just there the other day.  You start in Ludowici and aim for Glennville on U.S. 301 North.  After about three songs on the radio, slow down.  Look for Jones Creek Baptist Church, and turn left onto the dirt road.
After I left the asphalt, the next five miles in Long County took me back 50 years. I can still feel my teeth clicking on that sandy washboard, keeping time with the rattling of the Blue Bird bus’s windows.  As a first-timer to those backwoods—nicknamed Parker’s Paradise—I didn’t know what to expect in 1963.  Looking back, I can tell you that one-road-in-and-one-road-out hunting camp is where hair sprouted on my chest and many a boy—including me—became a man.
Coach Clint Madray, a devout Wally Butts disciple, didn’t win all of his football games, but no other teams were in better shape.  His secret preseason weapon was courtesy of Jim Parker’s hunting camp, a mile this side of Hughes Old River, just off the Altamaha.  Clint was a feed-’em-raw-meat-and-gun-powder kind of taskmaster.  He’d take his Jesup Yellow Jackets as far away from the bright lights as he could.  During those two weeks, he coached, cussed and chewed a bale of Beech-Nut, while we lived football morning, noon and night.
Besides a compound of shanty-like cabins, a bathhouse and a dining hall, Jim Parker provided a hayfield for our practice.  Just before the annual trek, our host would move the cows to another pasture.  But the bovines always left plenty of piles to step in, or worse, to slide in.  Your helmet’s face guard was a plow, churning manure.  You needed to keep your mouth shut. And whatever got on your uniform stayed until Friday.
Courtesy of Jim Parker’s grandson, Greg, I got to step back in time.  I took a tape measure.  I wanted to see just how small my first cabin was.  My roommates were Bill Williams, Ken Baker and Joe Warren.  Everyone, but me, was in the 250-pound range.  With my shoulder pads, I might have weighed 140.  Almost 1,000 pounds of sweat-slick boys, in their tighty-whiteys, were stuffed into that 9-by-12-foot tin-roofed oven.


We walked sideways between the two double beds.  I struggled, climbing uphill all night, to stay away from my hefty bunkmate in that sweatbox.  We hung our stinking uniforms on nails above the beds.  We kept the door locked and the window shutters tight, in fear “The Hook” would snare us during the night.  Hazing was among this-will-make-you-tough rituals, as was enduring ungodly heat.
When Greg and I walked into the dining hall, I retold the story of the fried chicken-eating contest between A.T. Hires and Frog Woods.  After a sizeable flock had been downed, A.T. excused himself to the front porch. Poking his finger down his throat, he made more room for the second round.  “That’s cheating!” bellowed Frog, and fists flew.
Greg remembers his dad, Jimmy, taking him to visit the football camp.  He was just a tyke, but he still has a visual of that yellow school bus, parked by Hughes Old River, and 50 buck-naked boys running to jump into the water.  That was our reward for extra hustle in practice.
A half-century later, Parker’s compound is still there, rustic as ever.  But times have changed.  Parents would protest until coaches were arrested, if the same tactics and conditions were used today.  A few teammates jumped the fence—during practice—and hoofed it to the hard road, looking for a ride home. Invariably, their dads would deliver them right back.
I am glad I got to go back—one more time—to that backside-of-nowhere camp. I could see Big Clint, with his hands on his knees, spitting Beech-Nut and barking, “Even a dead man has one more step!”


Some of us weren’t gridiron greats.  But if a boy survived Parker’s Paradise, he returned to the bright lights a man.