When a skunk visits, pheeeew!

The pair of schnauzers was the first to skid to a halt.  In near-frantic swirls they sniffed, sniffed, 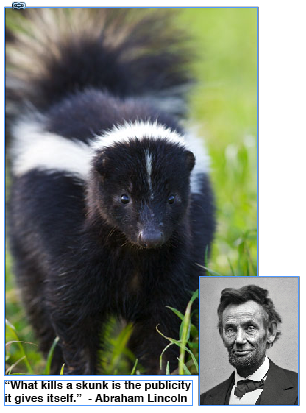 sniffed.  And then a pungent waft of skunk scent wrinkled my nose.

“Oh, no,” I muttered, bounding up the farmhouse steps to unlock the door.  In the laundry room, the polecat odor punched me—with a left and right—to my nose.  My pups looked up, cocking their heads as if to say, “I told you so.  Something stinks.”
No joke.
We walked from room to room—the dogs and I—sniffing. Everything—pillows, sofa, beds, chairs and towels,—smelled like a skunk had spent the night in the house.
Pheeeew!
I looked everywhere, but there was no black critter with a white stripe down its back.  Outside, I started poking around in the shrubbery, checking vents in the concrete block foundation. “A skunk couldn’t squeeze into these tiny spaces,” I mumbled.  That’s when I remembered an entry, underneath the screen porch.  Wading into the azaleas, I dropped to my knees to take a peek.
Ahhhh, ha!
Twenty feet away, I spied an opening. The plywood door was missing.  Looking up at my schnauzers on the porch, I asked, “Wonder how that happened?” With a flashlight, I belly-crawled, using my elbows—just like in boot camp—to pull my way through the leaves and dust.  At least there was no barbed wire or bullets whizzing overhead.
The odor was stifling, but I kept crawling, hoping I wouldn’t bump noses with a skunk, when I poked my head inside the hole.  Shining the light, I just saw cobwebs that had been collecting since The Great Depression.  But what happened to the door that was once there?
The crawl space was so small that I couldn’t turn over, so I spun around and dragged myself to daylight.  As I was rounding up plywood and a saw, I wondered, “Why didn’t I take a tape measure with me?”

Back under the house, I went to size the hole.  I decided to leave a small crack for ventilation.  On my third crawl in, I decided that, too, was a bad idea.  Our pecan trees attract squirrels. I didn’t want those gnawing pests under the house, so I crawled out for a bigger piece of plywood.  On the fourth trip under, I congratulated myself on solving the first half of the problem.
Standing in the daylight, I tried to brush the nasty debris off my jacket and jeans.  That’s when I sneezed and realized I should have worn a dust mask.  I could have planted sweet potatoes in my nose.
Inside, I emptied boxes of baking soda into cereal bowls to place all around, hoping the powder would soak up the stench.  Next, I sprayed everything with scent-free Fabreeze.
Two days later—presto!
The house didn’t reek, but I couldn’t stop coughing.  After a hefty medical investment, I declared victory over my respiratory infection and the skunk.  In celebration, I hoisted a Coke toast to Abraham Lincoln, who declared: “What kills a skunk is the publicity it gives itself.”


And, Abe, the stinking rascal dang near killed me, too.