Churchill’s hobby ‘may have helped to save Western Civilization’

Looking back at the 20th Century, who would be on your list of heroes? 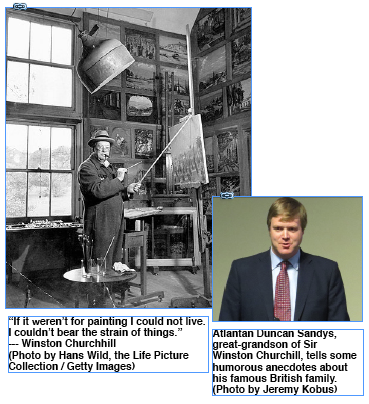 FDR?
JFK?
MLK?
Franklin Delano Roosevelt led our nation out of the Great Depression.  John Fitzgerald Kennedy backed Russia down in the Cuban Missile Crisis.  And Martin Luther King gave his life, trying to right the wrongs against his race.  These and more deserve their distinguished bookmarks in the pages of history.
Another who must be put on everyone’s short list is the first person to be granted honorary citizenship to the United States of America—Sir Winston Churchill.  If it weren’t for that pugnacious, cigar-chomping, almost-always-a-drink-in-his-hand Prime Minister of our mother country, you and I would most likely be speaking German rather than English.
While the world watched and waited, Churchill clenched his bulldog-like jaws and stood up to Adolph Hitler and his Nazi wickedness.  I love this quotation: “We shall defend our island, whatever the cost may be, we shall fight on the beaches, we shall fight on the landing grounds, we shall fight in the fields and streets, we shall fight in the hills, we shall never surrender.”
Fight he did.
I share the opinion that Winston Churchill—more than any other leader—saved the free world. Without his determined, “victory at all costs” leadership, Hitler would have had the globe in his chokehold.  To his credit, Churchill convinced his friend, FDR, to attend 1943’s Casablanca Conference—the only time an American president had left this country in wartime.
Churchill was uncertain that Roosevelt was committed to the proposed D-Day invasion, so he proposed a novel idea.   Our president traveled five hours through North Africa’s desert to Marrakech to watch the sun set over the Atlas Mountains.  Both leaders were mesmerized by the natural beauty.  The next evening, Churchill recreated the scene on canvas and later presented it to FDR.
That piece of art could have been the tipping point in FDR’s decision.  America’s men and women stepped forward to risk their lives.
Thousands of U.S. patriots died so that the Allies wouldn’t have to surrender. After Roosevelt’s death in Warm Springs, Ga., the world-changing piece of art had other owners, many unknown.  Fast-forward to March 2015, and there’s more to
the story.
Thanks to a presentation and exhibit at The University of Georgia, I have an even greater admiration of this English Nobel Prize winner.  Commemorating the 50th anniversary of Churchill’s death, the Hargrett Rare Book and Manuscript Library is now showcasing seven of his paintings and a display of artifacts that link the former Prime Minister’s connection to Georgia. I had forgotten that John Churchill, the 1st Duke of Marlborough, trained our founder, General James Edward Oglethorpe, in military tactics.


While attending the event at the Richard B. Russell Building Special Collection Libraries, I met Duncan Sandys, Winston Churchill’s great-grandson, who lives in Atlanta.  Sandys, along with Rodney Cook, CEO of the Millennium Gate Museum in Atlanta (www.thegateatlanta.com), planned and orchestrated the tour in eight Georgia cities.  I wish every Georgian could have heard the talks by Duncan and Rodney.
Leadership and fame don’t come without downsides.  Churchill drank heavily and battled depression.  Sitting at a canvas and easel—with a paintbrush in hand—is how he waged war on those demons.  Here’s what he wrote: “If it weren’t for painting I could not live.  I couldn’t bear the strain of things.”  Ernst Gombrich, noted art historian, went a step further: “His painting may have helped to save Western civilization.”
What if Sir Winston hadn’t had that uplifting and nerve-calming hobby?
The historic exhibit closes in Athens on April 17th.  If I haven’t convinced you to visit the Hargrett Gallery, yet, you need to go for this reason alone.  Churchill created only one painting during WWII, and you can see it at The University of Georgia. On March 18, the painting of “The Tower of the Katoubia Mosque” was unveiled in the Richard B. Russell Building Special Collections Library’s auditorium.   Handling the honors were Dr. Toby Graham, University Librarian, and Bill Douglas, CEO of Athens First Bank and Trust Company, sponsor of the evening’s event.
Duncan Sandys and Rodney Cook revealed where the priceless piece of art has been most recently—in the hands of Hollywood stars Brad Pitt and his wife, Angelina Jolie.   Incredibly, they loaned their treasure for the Georgia tour.  Rodney told me, “The Churchill world is ecstatic.”


Opportunities this rare shouldn’t be ignored.  The Russell Building—alone—is attraction enough.  But because you and I aren’t dictated to speak German is a good reason to experience this peek into a hero’s history— and our history, too.