Santa has landed his sleigh. Now, the Bulldog Nation is taking to the skies.  The Red and Black are barking their way to Pasadena for the Rose Bowl on New Year’s Day.  On Dec. 14, I lit the candles on the 1943 Rose Bowl MVP’s cake.  Well, it was really an ice cream sandwich.  Charley Trippi’s wife, Peggy, had told me earlier, “Charley’s favorite dessert is an ice cream sandwich.”  So, that’s what I took to the celebration lunch for whom fabled Alabama coach Bear Bryant once called the best college-football player—ever.
Seventy-five years after the University of Georgia’s first appearance in the “Granddaddy of them all” bowl game, Charley still remembers the four-day train ride to California.  The All American and Maxwell Award winner also recalls playing 59 of the 60 minutes in the 9-0 victory over UCLA.  He didn’t want to come off the gridiron.  Charley did it all—run, pass, receive, return kicks and punt.  Today, he is the only NFL Hall of Fame player to achieve 1,000 yards in rushing, passing and receiving in one season.
The basement of Charley and Peggy’s Athens riverfront home is a museum stuffed with memorabilia from his legendary careers in college and professional football and baseball.  His long list of MVP honors rivals the count of his numerous Hall of Fame awards.  And when he walks to the mailbox, he’s likely to find a handful of letters from fans seeking his autograph.
My 92-year-old father-in-law gives Charley Trippi another accolade.  In 1946, Lamar Shirah and his best friend, Buddy Davis, had driven from Mitchell County to see Charley play in Sanford Stadium.  On the way home, the back-from-WWII farmers pulled beside a carload of young ladies at a red light in Fort Valley. 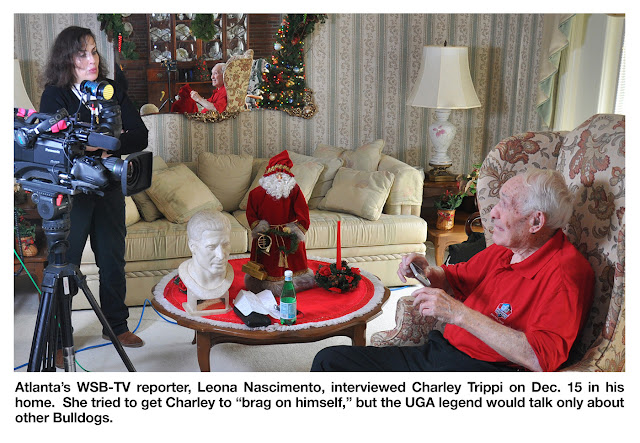 Through rolled-down windows, a conversation ensued.  When Lamar asked whether the ladies would like to join them for a Coke, Willene Lavender said, “My parents won’t allow me to go with strangers, but you are welcome to follow us home and meet my parents.”  Lamar and Willene celebrated their 70th anniversary this past Thanksgiving.  That means I owe my friend, Charley, a tribute, too.  Come August, my bride and I will mark our 49th anniversary.
The Bulldog icon has other Jesup connections—John Donaldson and Len Hauss.  John was part of what Coach Wally Butts called his greatest backfield: Charley Trippi, Dick McPhee, John Rauch and John Donaldson.  Charley was coaching when future All-Pro Washington Redskins captain Len Hauss arrived at UGA.  Charley teases the former Jesup Yellow Jacket great that he should get some of the credit for Len’s sterling 14-year NFL career.  Charley convinced Coach Butts to switch “Lenny,” the bruising fullback, to center.
But back to the upcoming Rose Bowl.
The day after Charley’s 96th birthday, I sat in the Trippi living room as Leona Nascimento of Atlanta ABC-affiliate WSB-TV interviewed him.  I had supplied Leona with some background and photos.  Several times, Leona looked at Peggy and shook her head.  No matter how the reporter phrased the question, Leona couldn’t get Charley to do what she wanted: “Brag on himself.”  Peggy kept repeating, “It’s not going to happen.  That’s not something Charley will do.”
What Charley did do was talk about other Bulldogs—past and present.  But he did single out the Rose Bowl as the highlight of his college career.  Calling it a chance of a lifetime, he challenged the 2018 Bulldogs to outscore Heisman winner Baker Mayfield and the Oklahoma Sooners.
And when that happens, Charley will no doubt celebrate with not just one ice cream sandwich but probably two. 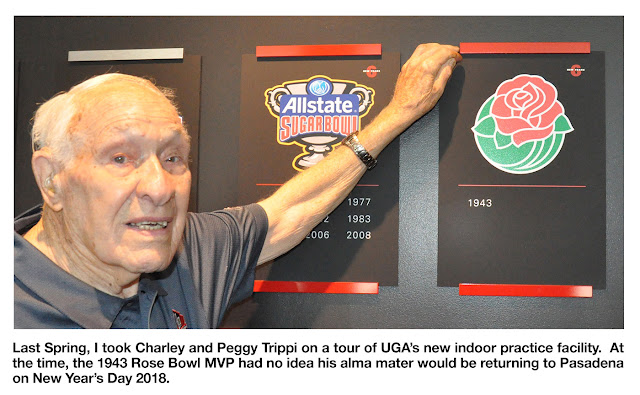 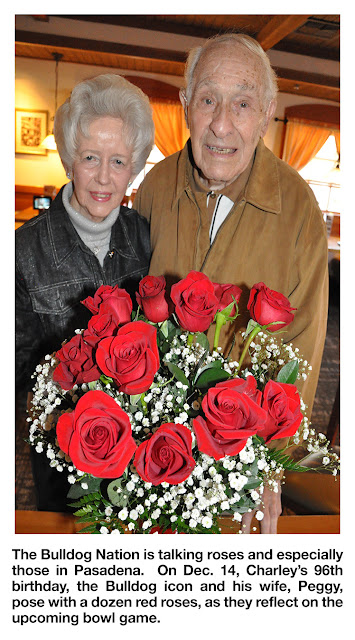 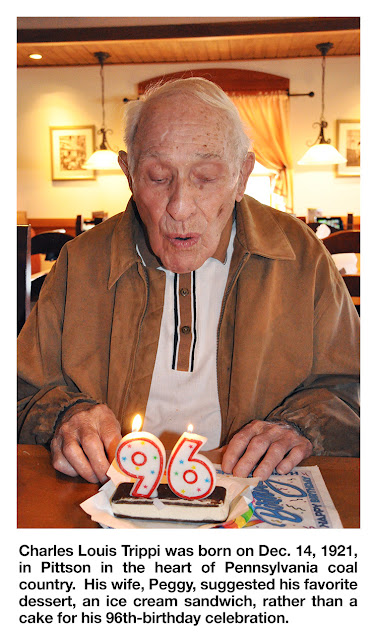 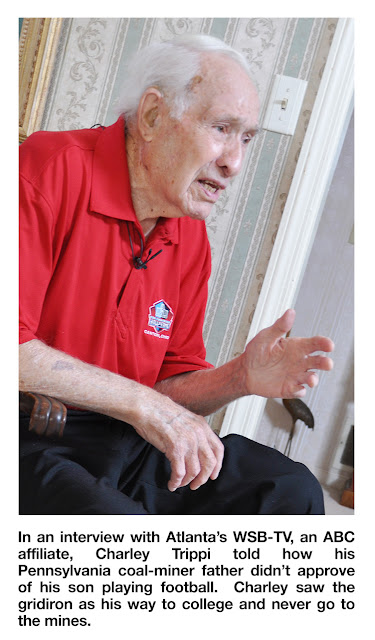